Small Painting Auction during the month of April, 5 MORE DAYS TO BID - details

The Set Up
When drawing a flower, or some other subject, you might feel you captured what was in front of you well enough but something just doesn't seem satisfying about the drawing. Your composition might be part of the problem. Below is a line drawing of some daylily blossoms growing in my front yard. I wanted to focus on the blooms, I love their color, and wanted to create this drawing as a sketch for a painting I would do later. When I was finished drawing the sketch I felt I captured what was in front of me rather accurately.

Unfortunately, upon further review, my drawing felt cluttered to me while at the same time seemed to have too much space in it. The overall effect was not pleasing. Often when you are unsure about your artwork you might have conflicting opinions about the same drawing. 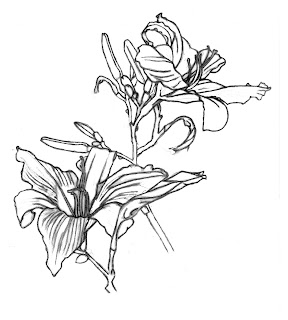 Despite what is in front of you, sometimes you have to rearrange your composition to make your drawing stronger and more interesting. Mother nature does not always face the best composed view of her beauties towards us. Now, moving things slightly to create a stronger composition is different than lying. I do not condone making things up, but I do encourage students to find the composition that best reflects their subject. What changes would you make?


What changes did I make?
Change 1: The buds located behind the lower bloom were partially hidden from view. The stem for the buds also lined-up awkwardly with the edge of the petal in front of it. I decided to bring these buds up above the bloom petals so the viewer could see them. I often represent a plant in different stages of development. This was an opportunity for that. 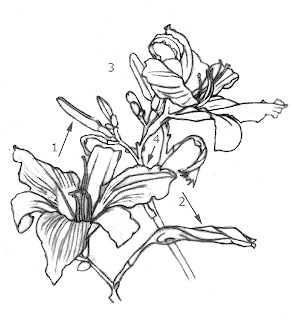 Change 3: I removed some of the extra buds and branches in the background. These created too much clutter. In botanical art, it is common to cut out parts of a plant in order to better express the plant. But, the fact that something has been removed is expressed by truncating the stem not simply by removing it as if it never existed.

Change 4: The composition was still a bit leggy, I felt that there was too much space between the two blooms. I compacted the composition by moving the entire back bloom section down closer to the front bloom. Day lilies bloom in clusters, and this change provided that feeling, as well as creating a more compact and powerful composition. The final composition is square with a strong horizontal element at the bottom; very strong.

Below is the final drawing of the composition. I was quite happy with it. 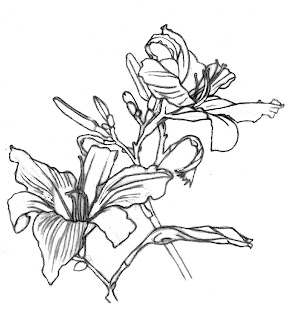 The presence of this badge signifies that this business has officially registered with the Art Storefronts Organization and has an established track record of selling art.

It also means that buyers can trust that they are buying from a legitimate business. Art sellers that conduct fraudulent activity or that receive numerous complaints from buyers will have this badge revoked. If you would like to file a complaint about this seller, please do so here.

The Art Storefronts Organization has verified that this business has provided a returns & exchanges policy for all art purchases.

If you don't love it or it arrives damaged, return it. Click above on the FAQ link for details regarding our 100% satisfaction guarantee, and for instructions on how to make a return.

This website provides a secure checkout with SSL encryption.

The Art Storefronts Organization has verified that this Art Seller has published information about the archival materials used to create their products in an effort to provide transparency to buyers.

For Paintings: Many of the still lifes of food are painted on cradled wood panels. The landscapes and all other paintings are painted on stretcheded 10 duck canvas. I make my own stretchers and wood panels in a wood shop attached to my studio. The wood substrate is made of pine or poplar and is cross-grained to prevent warping. The canvas and panels each receive three layers of gesso before being painted. After completion, each painting receives a protective varnish. The canvases, generally, have the images wrapped around the sides. I make my own canvases and panels to assure that, if framed and displayed properly, my paintings will last for generations. For prints: All prints are on archival 100% cotton fine-art paper. The paper has a smooth natural texture, is a sturdy 15 mil. thick and uses no optical brightners. Printed with archival water-resistent inks that will not fade for a hundred years, when properly matted and framed.

Your cart is currently empty.

This is only visible to you because you are logged in and are authorized to manage this website. This message is not visible to other website visitors.

The above preview shows how to use the live preview on this website. The image displayed is just an example, and is not available for sale.

This means you can use the camera on your phone or tablet and superimpose any piece of art onto a wall inside of your home or business.

To use this feature, Just look for the "Live Preview AR" button when viewing any piece of art on this website!

Below, select which favorite lists you would like to save this product into.

Thanks for Signing up to Follow my Art Journey!!

Be the first to be notified about new artworks, exhibits and events, and

special promotions only for Update recipients.

Updates are published once a month-ish.

Peanuts and Peanuts, oil on canvas